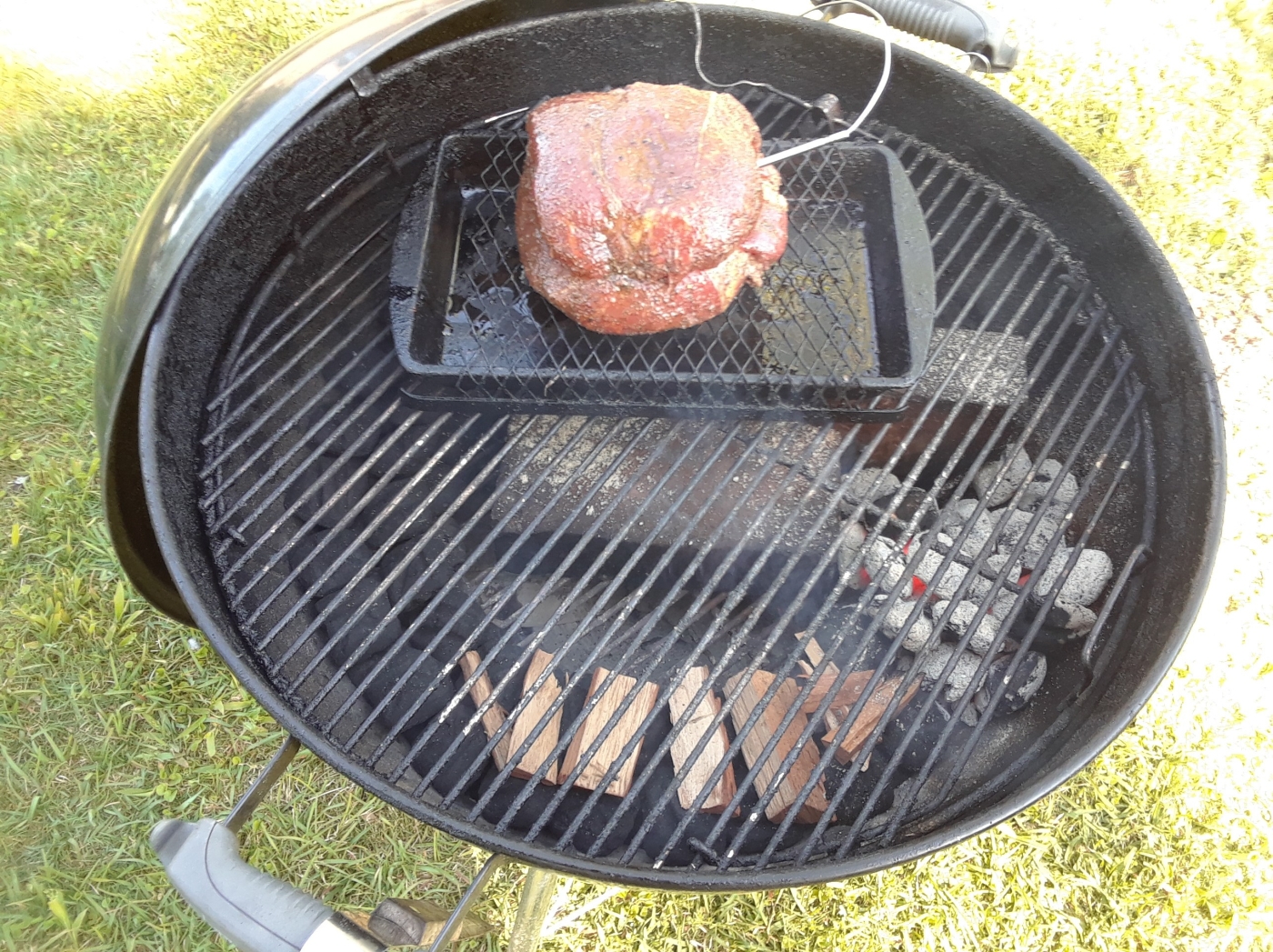 Guest Blogger: I asked my smoking, grilling, meat cooking man to contribute this to DiggingFood.com. The dishes I blog about are not usually meat focused. But, this was too delicious to not share. My man is good.

For all of my vegetarian readers, scroll quickly past this. I promise my next post will be green.

Plucking delicacies from the garden, field and forest floor is an unparalleled past-time. But cooking meat outdoors is the lifestyle that I was born to live.

My life journey in the charred-arts began, as most do, watching and learning from my dad as he grilled hot-dogs and hamburgers for kids parties or family dinners. I tried my hand at it as a teenager and was versed enough cook a decent steak by the time I moved out. Things really started to get serious, however, when I rented a house in college with a group of friends. As befitting a first bachelor pad, the place was a dump. The kitchen was barely functional and the stove just plain didn’t work. Luckily, we had a Weber Smokey Joe to see us through! I became a master of economy with this tiny charcoal grill. It was a workhorse oven/grill/smoker/warmer/range that learned to operate as my own 14″ gourmet kitchen. 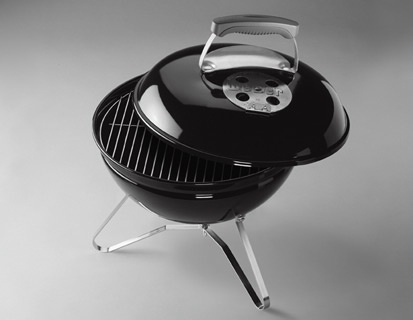 I’m still a Weber kettle man. I’ve graduated to the 22″ model and love it because of it’s versatility. While it’s well enough to use a charcoal grill for the aforementioned burgers and hot dogs, with a little technique, it is exemplary as a smoker for traditional low-and-slow barbecue that defines meat in The South.

This recipe starts with an errand trip to Coosa Valley Milling to pick up some organic chicken feed. While there, we are always sure to check the freezer up front. It’s often stocked with cuts of local farm raised, grass fed (with “just enough grain to keep them happy”) Black Angus, and sometimes even Wagyu from Mcewan and Sons. We were in luck! McEwan and Sons is famous for their grits, but all of the products that I have tried from them are top notch. This Black Angus cut was no exception. After a little discussion with a young Mr. McEwan trying to describe a tri-tip (a staple bottom sirloin cut where I am from on the west coast but surprisingly elusive in the south) we settled on a sirloin tip roast of almost 3 pounds.

Both of these roasts are perfect for this type of BBQ treatment. They carry a ton of flavor to match even the strongest smoke and require little more prep than some seasoning salt, pepper, olive oil and a knot in a length of butchers twine to hold it all together. Then, it’s ready for the cook. 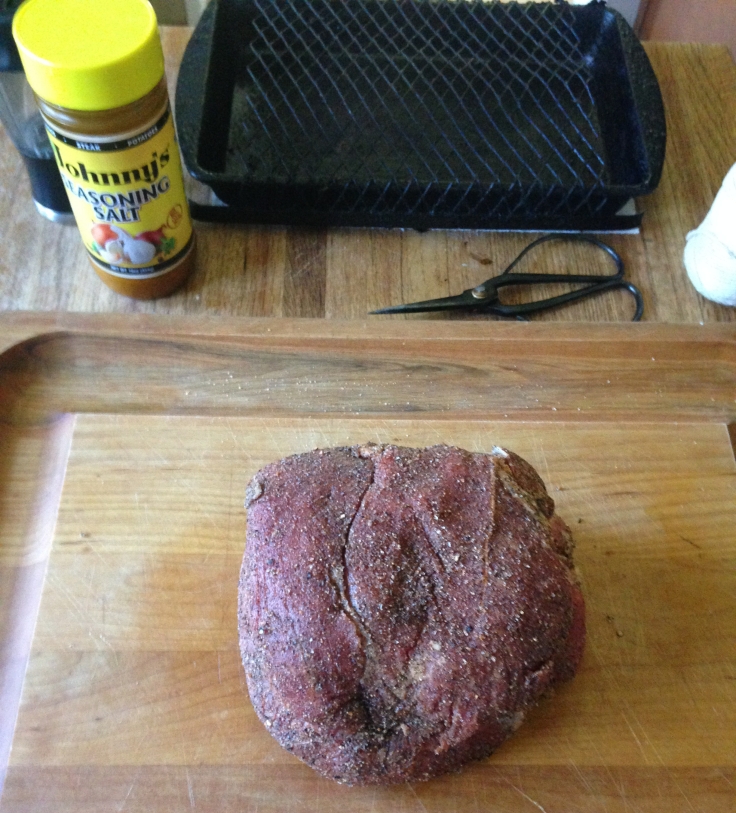 A note on wood

I have developed an affinity for pecan and hickory because of their flavor and abundance here in the south. They are both really good all-around grilling and smoking woods that can be used for chicken, beef or fish. But, for this particular recipe I decided to try out a new type of wood. We are going to be hosting a Luau themed party soon and I mail ordered some Kiawe (kee-ah-vey) wood from Guava Wood Farms in Hawaii. Kiawe is described as “a slightly sweeter Hawaiian mesquite” (although it’s not related to mesquite) and I would say that’s very accurate. Needless to say, it was a perfect compliment to the sirloin and I would recommend anyone pick some up and try smoking with it.

The primary impetus for this post was to provide primer on how to properly BBQ using Weber 22″ kettle. I have been using mine for a number of years now and find myself answering some of the same questions over and again as I peruse online BBQ and cooking forums. This is a very popular grill and is one of the more common cookers for people starting out cooking low-and-slow BBQ. There are a few details (read: mistakes that I have made) that I can share that will help any novice to master the method.

This is my basic set-up for the snake technique. (note: I’ve put in some old grey briquettes in for purposes of illustration.) The idea being that a small number of hot coals are dumped in at the 3 o’ clock position and will burn slowly around the grill in a clockwise manner keeping a low and relatively constant temperature.

If you’re lookin’ you ain’t cookin’

I used to be a Luddite. I’d stuff one of those fat glass candy thermometers in the top vent and then pull open the lid and check the meat every so often on an inserted meat thermometer. The results were passable but I found my cooks took a lot longer than I thought they should. And then I bought a digital dual probe thermometer. It’s nothing fancy. It’s bottom of the line and cost about $40. But the predictability and ease that it has added to my BBQ’s has made it worth it’s weight in gold. I highly recommend you get  one if you plan on doing more BBQing.

Once the BBQ is to temp and the meat is rubbed, the remainder of the process is relatively straight forward: smoke until done. In this case the roast went about 3 hours with the kettle a fairly steady 240° F. When done it was medium rare, internal temp of 130° F. I let it rest for 10-20 minutes, sliced and enjoyed.

Although this picture looks edited, it isn’t. The meat was an incredible bright pink and the smoke ring came out even brighter. Because of the olive oil, there is a bit of a crunchy bark around the edge. I take mine with horseradish.

One thought on “Meat Interlude: The Snake Method for Smoked Top Sirloin Roast”

We are salad rich! #frontyardvegetables #organicgardening #alabamagardening #lettuce #homegrown
#springonions #onion #groworganic
My Daddy is getting it done stocking up on delicious clover jelly. #foodinjars #canning #oldman
Hopefully there are more waiting to pop up after this weekend’s freeze. Get ‘em while you can. #morels #alabamaforaging #mushroomhunting @alabamamushroomsociety #mysticalforest #noiwillnotdropapinforyou #forestfood #wildfoodlove
The tiny earliest Morels are popping up in central Alabama !!!#morel #mushroomhunting #alabamamushroomsociety #forage #alabamaforaging #happyspring #morelhunters
Starting sweet potato slips with part of what’s left of the 2021 crop. This beats paying insanely high costs to purchase mail order slips and I love how they look growing in our windows. Little things like this help me make it through the winter. #ineedtogrowthings #sweetpotatoes #growyourownfood #oldways #sweetpotatoslips #groceriesareexpensive #organicfood #wintergardening